A Ride Around My Home Town

Here is a video I made of a ride around my home town. I fashioned a home made camera mount on to the Goldwing and bolted down my cheesy little digital camera. Maybe not the greatest of cinema but not bad for my first effort at motorcycle ride video.
Enjoy the ride.

Posted by Silverwinger at 8:03 AM 9 comments:

Only had time for five day run this year to test out the new bike, so Jane and Mike from Castor plus myself decided to challenge the Kaslo-Nakusp Highway. 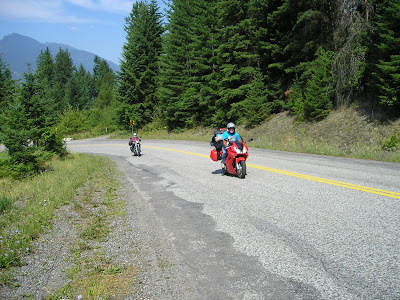 
The weather was great and the traffic light on this great motorcycle road.
Met lots of bikers on the roads, Ferries and campgrounds including a couple of Irishmen who were on a three week riding holiday picking up their rental bikes in Vancouver and then sampling some of Canada's best motorcycle roads. 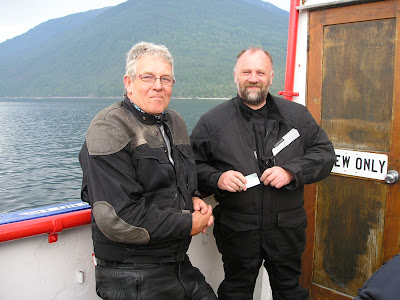 Also met a Valkyrie rider from Calgary named Peter and his wife who trailered their bike out behind a camper van and then just did the roads of their choice[best of both worlds]. Great talking about bikes with other riders and listening to their experiences and about their travels. Sorry Peter I forgot to take a pic of you guys and your bike. 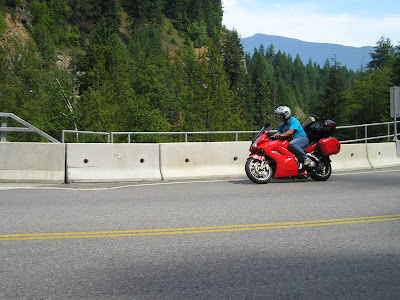 Mike on his Crotch rocket
We stopped often to enjoy the view and take some snaps of the scenery, Mike and I practised our riding style and tried to get a motorcycle magazine type shot of ourselves on the bike, pictures just don't do this road justice. I don't think you can find a road anywhere in the world that has as many curves and twister's as this one. 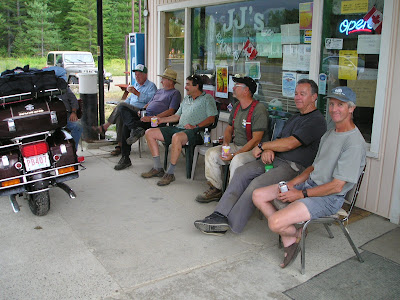 The Coffee gang at "Corner Gas"

During a small cloud burst I ducked under this overhang at a small gas station to get out of the rain, Mike and Jane wisely stopped earlier to suit up in their rain gear. This dedicated bunch of friendly guys gathered here every day to drink their coffee and watch the motorcycle squids go by, often yelling out whether it was a Harley or a crotch-rocket. They must of seen a million bikes go by their front door all summer long. They welcomed me into the club and were quite gracious about sharing the overhang with me. 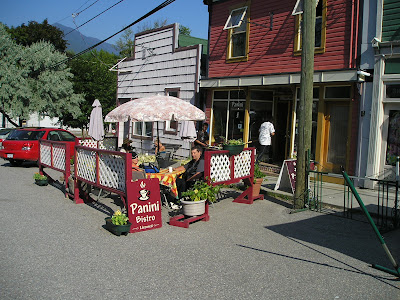 Are these tables for anyone?

No fast food along this route but some nice friendly small cafes and Bistros to tie on the feed bag and take a respite from the road. 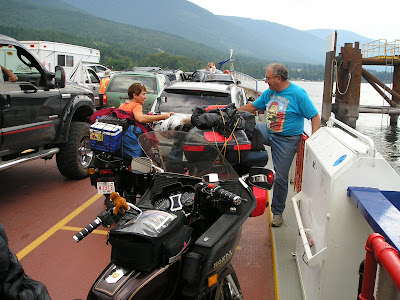 Ferry Rides are a highlight of the trip

One of the many highlights of this route are the free ferries along the way crossing two different lakes and if you choose to go west you can even work in a third ferry on the way to Vernon. 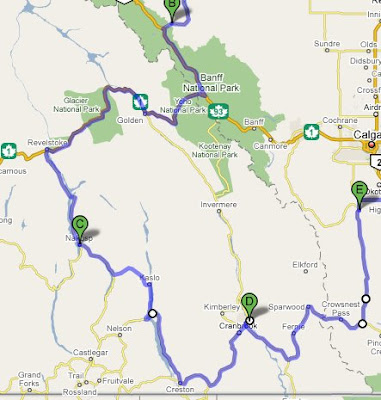 This is the route we were on and basically all the fun begins at Revelstoke as you head south on Highway 6 as the traffic thins out and the curves start to bend a little more and the road just gets better and better as you go. When you get to Creston you are back in the tourist zone with all of the traffic.

Posted by Silverwinger at 7:06 PM 5 comments:

With a Little Help From Friends

After a lot of searching the net and local dealerships with a lot of dithering about what I really wanted in a motorcycle, fate jumped in and I now have a new ride. Introducing the new to me, 1983 Goldwing GL 1100 Interstate previously owned by Deon and Cory of Edmonton Alberta.

I was really torn about whether I should buy a touring bike or go for one of the snazzy next to new cruisers. But in the end when I saw the ad for Deon's bike on the Internet, the deal was done.

I came home for lunch on Monday, sat down to check the latest motorcycle listings on Kijiji and spotted the bike which had only been posted in the last hour.

Breathless and excited I phoned the number and inquired about the bike and asked a bunch of silly questions and laid out a few scenarios on how I could make it to Edmonton (I live three hours away) before the bike was sold, and if we could load it into the back of my truck. The seller, Deon was very patient and tried to answer all of my breathless questions as I was starting to dither bad and was unsure what to do next.

Deon told me that when I finally decided what I was going to do to phone him back.

I paced furiously about the house trying to decide if it was worth the effort to race up to Edmonton to look at the bike, only to have my hopes dashed if someone closer decided to buy it before I could get there.

Dinner was on the table, but all I could think about was the bike. And if you have seen my girth, you would soon notice I haven't missed many dinners. Dinner would have to wait.

It was a no-brainer, this was the bike I had wanted, I would take a chance and jump in the car and head to Edmonton.

I told him I was only going to stop at the bank, grab the cash and maybe have to stop for gas somewhere along the road but I was on my way.

I must have smoked twenty cigarettes on the way to Edmonton constantly fretting about whether the bike would be there when I arrived or if some one else would snatch this Goldwing from my grasp.

Deon gave me some great directions over the phone as I neared his house, and when I walked up his driveway and into the garage I was sold. Deon was there and the bike was there.

Asked if I wanted to take it for a test drive I could only blurt out that if the bike started, I would buy it. Deon cranked the Wing to life and the deal was consummated.

Last week I lamented on the fact that buying a bike should be easy, and so it was, with the help and kindness of the seller. Deon waited for me to make the three hour drive to look at the bike while his phone was ringing off the hook from other buyers, he made it easy for me, for which I am grateful.

I had more help the next day as friends postponed a trip to their Mothers birthday lunch, to drive me up and pick up the bike. I wanted to buy them dinner when we arrived back at Castor but another friend who was happy that I had finally bought a Goldwing fed us for free.

Deon wasn't there when we arrived to pick up the bike, but his wife Cory was and with her help we put on my plate and I was ready to ride. Deon was a half hour away but I was so excited to get on the bike I never waited to thank him again for his help and kindness.

Its a great bike at a great price but the best part is the great people who helped me to be back in the saddle again.

Posted by Silverwinger at 9:20 PM 4 comments:

What an idiot I am.
I sold my bike and now am on the outside looking in. I stare with awe and bewilderment as I watch people on motorcycles whizzing by on the road, just like when I was a newbie with no motorcycle.
My grand plan to upgrade to a newer and bigger motorcycle ground to a halt as I seem to have hit a sellers market and everything I like and crave is beyond my monetary reach.
Of course not being able to make up my mind and determine what kind of bike I am looking for has cramped my motorcycle shopping.
My mind changes on a hourly basis as to whether I want a cruiser or a touring bike. I believe this may be some kind of mid-life-motorcycle crisis where my motorcycle hormones are raging out of control.
As the riding season slips away my motorcycleless induced bout of insanity slowly drags me into thoughts of rapture as I envision the possibilities of bikes that I will never own and then the thunderous crash of reality hits me as I look at the rats nest of possible mechanics specials that are awaiting me if I make a poor choice.
Motorcycle shopping is not easy, it should be though, last time I bought I went into the dealers and he had one choice for me and I bought it.
Simple and easy, the way it should be.
Posted by Silverwinger at 7:16 AM 5 comments: 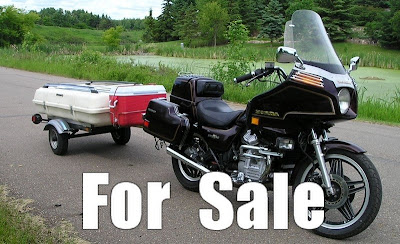 On Jun 27, 2008, post@kijiji.ca wrote:
You've received the following reply to your "1981 Honda Silverwing" Ad on Kijiji:
From: lloydsmith@XXXX
I cant beleive you are selling your namesake, I have been a fan of your website, are you upgrading.
Oh man, I never thought any one would notice.
Yes as much as I like the little wing I feel it is time to upgrade to a newer bike, I wish I had the money to keep the silverwing and a newer bike but I need the money from the old bike to buy a new one.
I plan to keep on blogging only with a different bike, I will still blog under silverwinger as its not easy to start out again.
I still haven't sold the bike yet and am in no hurry to give it away so who knows I may have it forever.
But thanks for the e-mail, it is nice to know you were reading the blog even though I am not very regular with posting.
My latest post is about some Nigerian scammers e-mailing me about the bike.
I don't really have a lot of money to throw around and in fact when I bought the Silverwing I purchased it with my Mastercard and just recently got it paid off after three years. I planned to sell the silverwing and put another $2,500 on the master card again and try to buy a newer or bigger bike.
I first thought about a Goldwing but then got caught up in the Harley Hysteria{too expensive} and am now leaning towards a Yamaha V-star.
Currently I am eyeing a 1985 Goldwing with low miles, or a 2000 V-star 1100. The V-star is quite intriguing as it looks more like a Harley than a Harley does, and is better built.

Hey, I think I just got a new posting for my blog.

Posted by Silverwinger at 4:27 PM No comments:

I made a couple of more widescreen wallpapers, these are 1280 x 800 and should fit your widescreen perfectly. Just click on the photo to see the full size pic, then right click and save to your pictures, enjoy. 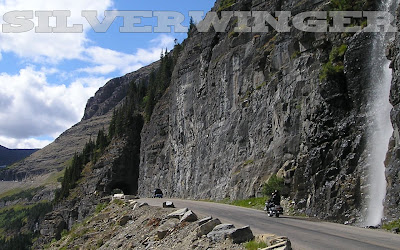 Going to the sun highway, Montana 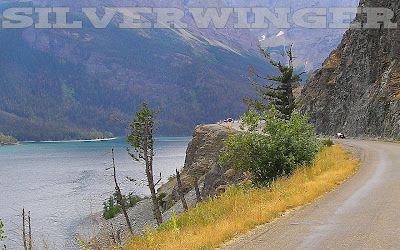 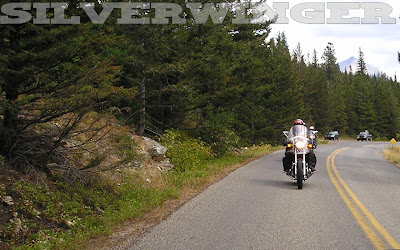 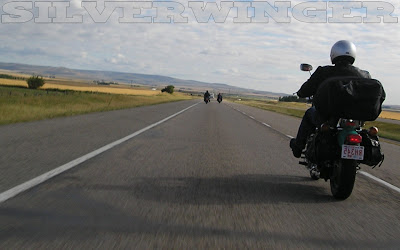 Heading south out of Alberta 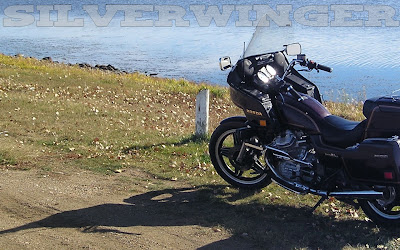 Posted by Silverwinger at 4:00 PM 6 comments: 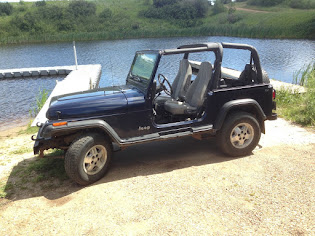 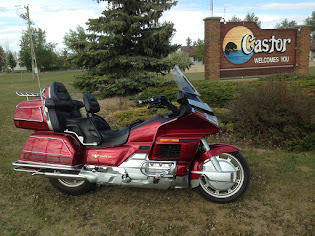